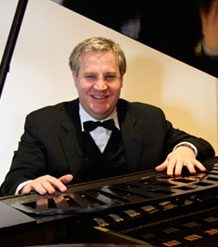 Originally from Busselton, Tim moved to Perth to study Classical Piano with Jean Roberts and Robert Curry at the Western Australian Academy of Performing Arts (WAAPA), graduating in 1994.  During his third year he received a scholarship which enabled him to study with Frank Iogha at the State University of New York.

Since then he has built a reputation as a leading accompanist, chamber musician, and Musical Director for theatre productions. He has undertaken Music Direction for The Effie Crump Theatre, The Music Theatre Company of WA, DAMAGE Theatre, Peach Productions, the Multiple Sclerosis Society of WA, the Gilbert and Sullivan Society, His Majesty’s Theatre, Downstairs @ Maj, and WAAPA.

In January of 2004 he was accompanist for The New I Voci choir on their concert tour of Germany, and in the following December undertook Musical Direction for His Majesty’s Theatre’s centenary celebration “Cavalcade.”

In 2008 his first original work, the opera “African Queen”, was staged at the Blue Room Theatre in Perth in a workshop season. He was one of five composers Australia-wide to be invited to participate in Peter Cousen’s Kookaburra “5 in 10” workshops in Sydney in the same year. 2008 also saw Tim conduct Hollywood legend Debbie Reynolds in Peach Production’s season of “Irene” at His Majesty’s Theatre.
He is currently Music Director of Peach Productions, Churchlands Choral Society, Mirage Makers, lecturing in Music Theatre at WAAPA, and studying conducting with Dobbs Franks.