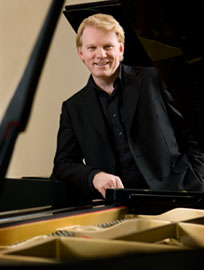 After studying and working in London, Mark Coughlan decided that the lifestyle and quality of wine in Perth was infinitely superior and he returned to establish a busy career in music performan

ce and education in Australia. Mark has held some rather lofty positions, including Federal Chairman of the Australian Music Examinations Board, Head of the UWA Music School and as a Director of Musica Viva Australia, but he has also slummed it as a downtrodden, overworked and underpaid concert pianist, lecturer, promoter and music critic.

He was Musical Director for the 2006 Leeuwin Estate Concerts and is currently Artistic Director of the Government House Foundation concert series held in the beautiful Government House Ballroom. He performs regularly on ABC Classic FM and plays a wide range of music, from Beethoven to Broadway. When not engaged in musical activities, Mark pursues business interests in the medical services area and indulges his passion for old cars, fine food and fabulous wine (not necessarily in that order).

He can be found jogging through King’s Park with his dog Mia and thinks Perth’s best coffee is found in Subiaco.