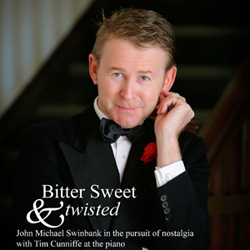 Coward music expert Dominic Vlasto has reviewed John Michael and Tim’s CD Bitter Sweet & Twisted. You can see the full review below, and purchase your own copy of the CD by clicking here.

The highlight of the Noël Coward birthday celebrations in London this year was the Noël Coward Society’s Annual Luncheon at the Garrick Club, where we were entertained not only by our urbane host Donald Sinden but also, in his West End debut prior a to a six week season by John Michael Swinbank accompanied by Tim Cunniffe.

John Michael is based in Perth, Western Australia, and has been described as “Australia’s foremost Coward exponent.” His special affinity for Coward’s material has resulted in 20 overseas tours, blazing a trail across the Far East, Middle East and India and on board the QE2. With him to London came a few copies of his new CD, Bitter Sweet & Twisted (MM2501), which along with numbers by Sondheim, Gershwin/Duke, Rogers & Hart and Porter features eight Coward tracks. The majority of these are comedy numbers, and the CD kicks off with three in a row, ‘There Are Bad Times Just Around the Corner’, ‘A Bar on the Piccola Marina’ and ‘Uncle Harry’, all of which are delivered with considerable aplomb and expertise, as is ‘Mad Dogs and Englishmen’ towards the end, and his “Mrs Worthington’ gives a very nicely-judged progression from suave politeness at the start to ‘tearing bloody rage’ by the end. Once could quibble about moments of lyric unclarity, but this would be churlish when the overall effect is so accomplished.

John Michael is ably supported by this long-time accompanist, Tim Cunniffe, a well-trained musician who does an admirable job of not over-accompanying the comedy numbers. They too (as well as Messrs Green and Shrubsole) have done their Coward homework, for here they also give us a recording ‘Alice is At it Again’ which includes the extra verses given by Barry Day. I don’t want to make any sort of comparison between the vocal styles and mannerisms of the two performers, which would be invidious, but I do think that as an overall construction for a cabaret song performance, Swinbank and Cunniffe’s reconstruction has the edge here, and I’d recommend hearing the CD if only for this track. However, my greatest delight, both in live performance and on this CD, was/is his rendition of “Matelot’ which I have seldom heard better-sung. There’s something of a hit of vulnerability that John Michael brings to the music, which is perhaps even reminiscent of the vocal quality and style of Graham Payn himself, which seems absolutely apposite, and the song’s pitch range is exactly right the John Michael’s vocal range. I found myself wishing therefore, that John Michael had recorded more of the melodic, lyrical numbers, and fewer of the comedy numbers – but that is a fairly lame criticism and it’s the only I have. The CD is available to purchase on (AUD $25 from www.miragecorporation.com (click on “Online Shop”).

Click here to go back to the main page.