Click "Noel at Noel" below to listen to John Michael's interview with Musical Talk, the independant musical theatre podcast site for the United Kingdom.


John Michael speaks to Rosalie Higson from The Australian
December 18, 2008 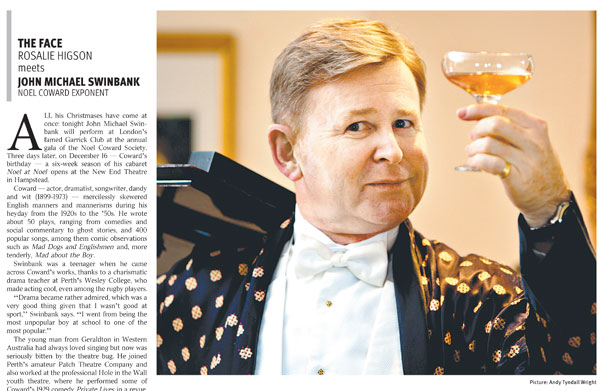 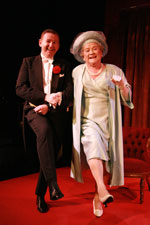 The WA Playwright’s Consortium, Stages will support the script redevelopment of the hit of the 07/08 theatre season, Two Old Queens.

Written by John Senczuk and co-devised with John Michael Swinbank, Two Old Queens premiered at The Blue Room in October 2007. The play is an inspired and witty meditation on the friendship between Her Majesty, The Queen Mother and her old friend, Sir Noël Coward, starring acclaimed actor Edgar Metcalfe as HM and cabaret vocalist, John Michael Swinbank as Sir Noël. The production won The Blue Room Award for Best Box Office in 2008 and a nomination for Metcalfe as Best Actor in the 2008 Equity Awards.

Following its runaway success, Two Old Queens transferred to the larger Subiaco Arts Centre and toured to Adelaide, Melbourne and Sydney. Executive Producer of Mirage Makers, John Michael Swinbank said that Stages’ support was a welcome investment in Western Australian theatre making. “Two Old Queens is a brilliant concept which developed rapidly into a fully realised piece without an exploratory development period due to the excitement surrounding its public presentations here in Perth and over east,” he said. “It may seem back to front but a development period coming after its initial seasons will benefit from the feedback of thousands of audience members who saw the show and the working knowledge of the performers.”

Director of Stages, Phil Thomson said that the Stages’ assessment panel were impressed by many aspects of the work. “We strongly support the idea of a play that has had successful public performances being reworked and rewritten for a bigger and better future, he said. “This work certainly has ‘legs’!”

Two Old Queens is slated for production in 2010 in Australia and England.


Mirage Makers conclude preview season of Noël it All!

Mirage Makers thank all who supported and attended this weekend's preview season of Noël it All! at the John Inverarity Centre, Hale School. The shows were a great success and a perfect platform to preview the new work which will debut in London on Noël Coward's birthday, December 16.

Special thanks to our sponsors Osborne Park Volkswagen and House of Ernest. We also gratefully acknowledge the support of the Department of Culture and the Arts (Artsflight) for helping JM and Tim on their way to London!


Osborne Park Volkswagen announce support for Noël it All!

Mirage Makers is delighted to announce that premiere local business, Osborne Park Volkswagen will support the gala send-off performances of Noël it All! on November 28 and 29 at the John Inverarity Centre, Hale School in Wembley Downs.

The Hale School performances - scheduled prior to John Michael Swinbank and Tim Cunniffe’s departure to the United Kingdom - will showcase their cabaret act that will run for a six week season at the New End Theatre, in Hampstead, London.

Assistant Manager & E-marketing Coordinating, Bevan Marwick said that Osborne Park Volkswagen is delighted to assist in the presentation of the show.

“We believe in supporting the cultural life of our local community and we are particularly pleased to be able to assist with these performances that create unique opportunities to celebrate achievement and excellence of our Western Australian artists,” he said. “John Michael and Tim are to be congratulated on a significant international opportunity and we are more than happy to help them on their way.”

The title of the show, Noël it All! refers to John Michael’s 25 year career fascination with the works of theatrical master, Noël Coward.

As part of his Silver Anniversary, The Noël Coward Society has invited him perform at the Annual Gala in the West End on December 13 that celebrates the life and achievements of a man who was known as the Master. Three days later, on Coward’s birthday, December 16, Noël it All! will debut in London at the New End Theatre. 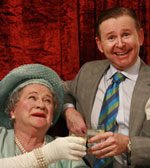 Edgar Metcalfe has been nominated for Best Male Actor in the 2008 Perth Theatre Trust Equity Guild Awards for his role as HM The Queen Mother in Mirage Maker's 2007 production of Two Old Queens.

The other nominations for the award are: Benj D'Addario (Glorious!), Stuart Halusz (Loveplay), and Luke Hewitt (Road Train). For the full list of nominees, click here.

JMS Mirage Corporation congratulates all nominees and wishes all the best of luck for the Awards!

As part of our fundraising for our London debut (see news item below), we invite you to become a Noël it All – London Calling supporter by making a tax deductible donation to the Australia Cultural Fund, operated by the Australia Business Arts Foundation. With your support we will be able to cover the costs of our theatrical season opening on Coward’s birthday, 16 December at the New End Theatre in Hampstead www.newendtheatre.co.uk

Click here for an official donation form which you can complete and return to AbaF directly, should you be able to help us. You can also visit their website for more information and to donate online.

For more information and to order your copy, click here.

To celebrate the London debut of John Michael Swinbank, Mirage Makers are presenting three special send-off performances of the cabaret show Noël it All! in Perth this November.

Noël it All! weaves a captivating narrative of Coward’s life and times with John Michael’s own personal story, starting with his childhood in Geraldton, Western Australia where a gift unwittingly began more than two decades of passion for the works of Coward.

“Tart as a royal bastard”, John Michael relishes the waspish observation in Coward’s famous comedy classics, Don’t Put Your Daughter on the Stage, Mrs Worthington and Mad Dogs & Englishmen as well as the bittersweet longing in his elegant signature songs, I’ll See You Again and Matelot.


Deliciously nostalgic, surprisingly contemporary, Noël it All is first class entertainment for people of discernment and lightness of heart who love exquisite social observation, magnificent word play and a yearning for another world.

Noël it All! - London Calling

Cabaret singer, John Michael Swinbank has been invited by The Noël Coward Society to perform at the annual gala celebration of the life and achievements of one of the theatre’s greatest legends Sir Noël Coward in London this December.

The Australian based singer renowned for his distinctive interpretation of the British composer’s songs will make his UK debut at the occasion. Distinguished actor, Sir Donald Sinden will host the gala at the legendary Garrick Club on December 13, following a flower-laying ceremony at the statue of Noël Coward at the Theatre Royal, Drury Lane.